The following is a free-write, very rough, of a childhood memory turned into a work of fiction.


The bell sounded and the students all scrambled to clean up so that they would be ready to be dismissed for recess.  Ms. Ryan looked around the room and gave the signal that released the class.  And then, "Sam and Shelly, stay here for a minute please."

Sam turned around and felt her insides quaking.  This could be many things, but it didn't seem like it would be good news.  She racked her brain to figure out what she might have done wrong that morning.  She couldn't think of anything.  What did Shelly have to do with anything either? They never really talked to each other and there wasn't much that would bring them together. Biting her lip, Sam walked over to Ms. Ryan's desk, where Shelly was already standing.

"Sam and Shelly, I had a chance to go through the applications for the newspaper positions and I have some good news.  You two have all the qualifications necessary for the Editor-in-Chief position.  Unfortunately, I am having a very hard time deciding between the two of you." Ms. Ryan paused while Sam and Shelly warily eyed one another.  "I have a choice for you girls to make.  Either you can work together and be Co-Editors or we can put the choice to the class for a vote.  Keep in mind that I already have decided all the other Editor positions so the person who loses the election would then be in a worker position."

There was a long pause.  Sam and Shelly looked at each other and shrugged, each feeling the unbearable weight of this decision.  Each wanted the position badly, and each wanted to be the only one with the prestigious title of Editor-in-Chief.  Shelly spoke first. "I think we should have the class vote." Sam cringed and thought, "Of course you do." Sam knew that she was not popular. But this vote wouldn't be a popularity contest, would it? Surely her classmates would vote for the person who would do the best job.  Sam knew she was the best girl for the job and she was sure her classmates would see the truth of it.  "I guess the vote would be okay.  I agree that we should have the class vote."

"Are you sure? Whoever loses the election will be out of the editor job and in layout. Wouldn't you rather share the responsibilities?" Ms. Ryan wanted them to be sure.

"We're sure." Sam said confidently and Shelly nodded along.

"Okay, then the election will be immediately after recess.  Think about what you want to say to the class." Ms. Ryan went back to her stack of papers to grade. Sam and Shelly headed outside for the remainder of recess.

When the class came back inside, the vote happened fast.  Sam lost.  She was shocked and devastated.  How could her classmates be so dumb? Didn't they see that she was the right girl for the job? Shelly beamed and soaked up the congratulations offered to her by Ms. Ryan and the rest of the class.  Sam felt hot and she felt tears prickling the corner of her eyes.  She wasn't going to give them the satisfaction of seeing her cry.
Posted by Andrea at 12:17 PM 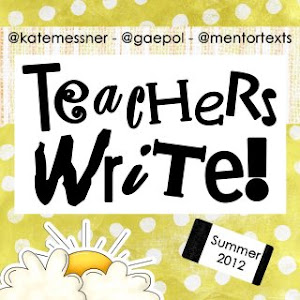 Andrea
Mrs. Payan is currently a 4th grade teacher and a life-long reader. All opinions on this blog are my own opinions and not those of my employer.